Access control in SAP is a challenge in any context.

Having multiple companies within a shared SAP ecosystem created a unique set of access control issues for Saint-Gobain South Africa.

In this article, we’ll share the highlights of Saint-Gobain SA’s journey to SAP authorisation compliance, specifically how they managed cross-division access control.

The challenges of outsourcing and authorisation creep

Typical of most companies running SAP, Saint-Gobain SA also had a challenge with “authorisation creep” where users inherited additional access as they moved internally between jobs and business units within the group. As the user moved to a new position there would be a handover period where they would require temporary access to their previous role. However, since there was no access risk solution to highlight these risks, access would often remain in place.  This resulted in a “leaky Chinese wall” between the companies.

Saint-Gobain SA was passionate about implementing good SAP security. They realised that they needed more than just a technical access risk solution and approached Soterion for assistance in understanding and fixing the underlying problems.

Robust access control can be compared to a multi-storey building. A strong foundation requires good role design for both business and technical roles. The organisation benefits from a GRC solution as soon as a strong foundation is in place. Once a solid role design and GRC principles are in place, the next level of Identity Access Management (IAM) can be implemented, promoting and ensuring fine-grained control of access. 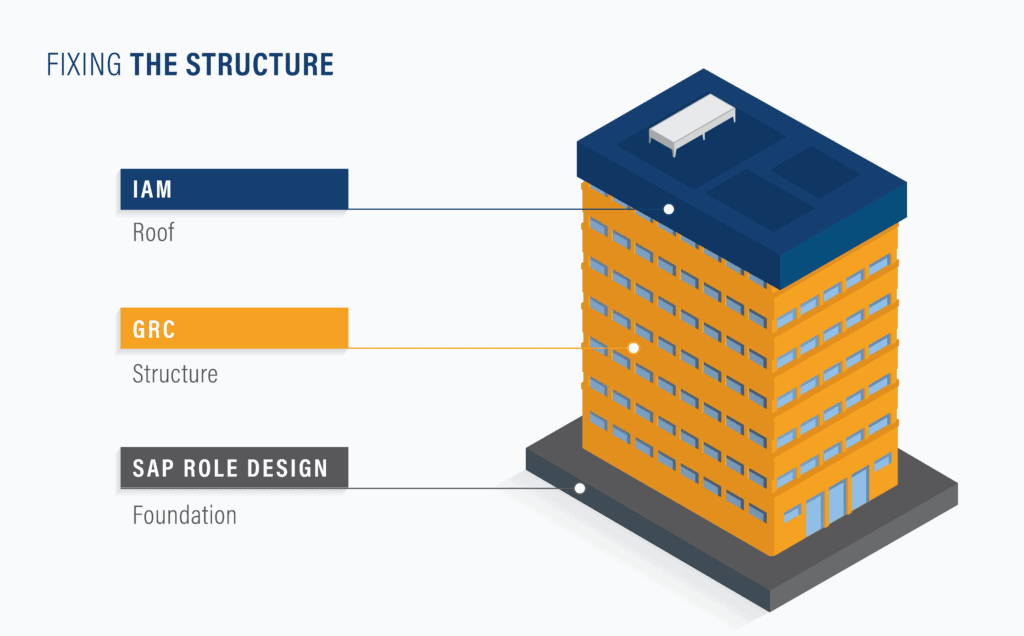 The Soterion solution was implemented with a market-leading access risk rule-set. However, as with all standard or out-of-the-box rule-sets, they are designed to be applicable to organisations across different industries and geographies. Customising the rule-set to be Saint-Gobain SA specific was an important step in the journey to ensure business buy-in.

As it is impossible to operate without any access risk, mitigations play a vital role in reducing the organisation’s risk exposure. It was important to mitigate those risks that were unavoidable and relevant to the organisation. Many controls already existed in the business. These controls were identified and documented into a central repository and mapped to risks in the customised rule-set.

Part of the solution was educating line managers on risks and mitigating controls relevant to their area of responsibility, promoting ownership. Business unit heads were trained to understand what they were reviewing so that they can make informed business decisions, thus promoting a culture of risk awareness in the organisation.

An SAP system is constantly changing as the organisation evolves. Employees move between departments, new employees join, and in the case of a group of companies, employees sometimes move to sister companies. User access needs to change with every movement of an employee, but without appropriate support, they often remain incorrectly assigned.

Saint-Gobain SA understands the reason for their SAP authorisation challenges prior to their GRC journey and wants to ensure that the solution stays in good shape. They understand that much of the integrity of their authorisation solution relies on the abilities of their outsourced provider to implement best practices in line with the new approach.

The failures experienced with previously outsourced providers highlighted that they are not just wanting to outsource authorisations. Instead, they are looking for a more comprehensive offering: GRC as a managed service.

GRC as a managed service is a relationship between the service provider and client that contributes expertise along with technology to fulfill certain needs. It isn’t just outsourcing technical activities – it is a partnership where the service provider looks after the client as if they are part of the organisation.

For SAP GRC, a managed service extends beyond standard SAP authorisations to include risk, controls and audit support.

As Saint-Gobain SA matures on their GRC journey, their internal expertise has allowed them to bring some of the activities in-house. This means that they no longer need to rely fully on the outsourced support to perform authorisations functions. Instead, only role content changes now need to be outsourced, while the allocation of roles is handled internally.

For Saint-Gobain SA there was a constant challenge around access control to their SAP systems.  They didn’t have a clear view of their access risk and suffered from authorisation creep. The problems they experienced were further compounded by outsourced partners who performed technical functions on request, rather than guiding them towards best practices. In fact, with the change of every outsourced resource, different role design methodologies made it overly complicated to manage role access. All these issues were reflected in the results of surprise audits, which they often failed.

Governance, Risk, and Compliance is a continuous journey. With the support of Soterion, Saint-Gobain SA has established a sound basis for their authorisations and a clear roadmap ahead.